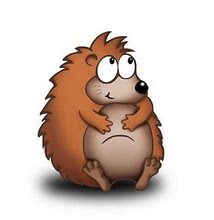 Walter Wikia is about mainly cartoons imagined by ordinary people, which they hope could be the next Mickey Mouse or [[Bugs Bunny]!...or Juice.

Walter Hedgehog is a Daurian hedgehog who has a thick Brooklyn accent.

Walter is a daurian hedgehog who was born in Brownsville, Brooklyn, New York, but was raised in Albuquerque, New Mexico. Walter has ducktail hair that is often covered by a brown or hazel fedora. Walter has brownish-orange fur and black eyelids(although they are sometimes colorless). He typically has large feet with 3 toes and fingers. Walter's voice changes depending on his mood; when he is excited/happy/angry and/or surprised, he will stay with his Brooklyn Accent. When he is sad or depressed, he has a rough voice like an average old man. As the series progressed, Walter's voice become even more lower pitched!Despite being the main protagonist, Walter has all the qualities of an ANTAGONIST. He is selfish, greedy, sarcastic, gullible, mean, cranky, eccentric, defensive, aggresive, unappreciative, rude, foul-mouthed, and presumably evil. So, recently, such as 2004, Walter was changed to an antagonist, so Garfield Gar was a secondary antagonist, and XENOPHANES was the main protagonist. But, Walter still had the main role.

Walter's best friend is Xenophanes Gryphon, although Walter considers him to be more of an annoyance. Because of Walter's sour attitude, he doesn't have many friends. Walter is very manipulative, as he only considers Xenophanes his "friend" just because of his unbelievable strength. Walter is the most hated person in Lincoln Woods.

Retrieved from "https://walterhedgehog.fandom.com/wiki/Walter_Wiki?oldid=6162"
Community content is available under CC-BY-SA unless otherwise noted.